Berengaria VII is the seventh planet in the Berengarius System near the edge of Federation space in the Alpha Quadrant which is nearest to the borders of the Gamma Quadrant. 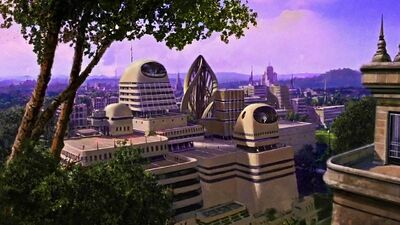 It is an uninhabited class M planet that is rich in forest and plant life as well as in natural resources.

As of 2385 it became the base of operations of Berengarium Command, a major field division of Starfleet's Vanguard Command.

It is orbited by the Buckingham-class space station Starbase 514.

Berengaria VII itself is further protected by a network of automated self-replicating orbital weapons platforms borrowed from Cardassian technology, which were defended by regenerative force fields and equipped with three heavy phasers and 500 photon torpedoes each. The regenerative deflector shielding of these platforms protect them from return fire, rendering them nearly invulnerable. The whole network is powered by three large redundant generators, each placed in different hidden locations in the system.

A Federation colony resided upon by 18,000 civilians is located on the surface of the planet. This colony is protected by Berengaria Base, the primary support facility of Berengaria Command and Starbase 514. Berengaria Base is manned by 1,200 Starfleet personnel and 2,400 Federation personnel.

Retrieved from "https://memory-gamma.fandom.com/wiki/Berengaria_VII?oldid=96153"
Community content is available under CC-BY-SA unless otherwise noted.