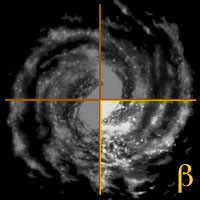 The Beta Quadrant is one of four quadrants in the Milky Way Galaxy.

The Federation has maintained peace with the Klingons for nearly a hundred years, and has forged a stronger new alliance with them after the Dominion War.

As for the Romulans, their government was weakened by an attempted coup by the Reman Shinzon. Later, the star Hobus went supernova and destroyed their homeworld of Romulus. The former empire is now in ruins.

Retrieved from "https://memory-gamma.fandom.com/wiki/Beta_Quadrant?oldid=109425"
Community content is available under CC-BY-SA unless otherwise noted.