Start a Wiki
The Klingons were humanoids from the planet Qo'noS in the Beta Quadrant. They formed a government called the Klingon Empire and fought in many conflicts with the Romulan Star Empire and United Federation of Planets.

There were two theories on the origins of the Klingon race. Regardless, it is mutually accepted that they originate from Qo'noS.

According to Klingon mythology, the gods created the Klingon race in an image not of their own. Like the deities of the human Greeks, the Klingon gods had an agenda of their own, which often lead to suffering and chaos for their new creatures. In answer, the first Klingon slew their gods (who were mortal beings), forever sealing his people's place as warriors and conquerors.

According to Federation scientists, a race of proto-humanoids seeded the primordial seas of various worlds with their DNA, which began the evolution of all humanoid life in the universe. The Klingon race was one such, being largely crustacean capable of spitting venomous acid.

Somehow, over millions of years, these creatures evolved into the dominant race on their planet.

This is a theory by User:Bookworm1138. It is open for discussion and translation.

When Kortar, the first Klingon, and his mate killed the gods, they were cursed to pay upon their deaths for killing the ones who created them. This they ignored, for they were lively and strong and feared not even death. In time, these two had children. In such they began to populate their homeworld of Qo'noS.

However, eventually, bad blood broke out between the children and their parents. Kortar believed that, despite the curse laid upon them, they should strive to find some purpose for the blood-lust within their veins. His wife, Fek'lhr, believed that, because of the curse, they should simply fight and kill for the simple pleasure of it, rather than for any real purpose. Half of their children sided with Kortar, becoming the Kota, and the other half sided with Fek'lhr, naming themselves fek'Ihri.

Kortar and Fek'lhr watched the battle of their descendants, and even battled among themselves, but they refused to kill each other for fear of bringing about the consummation of the curse. But death eventually found them. Fek'lhr died first and, because of her vanity, was reincarnated as a hideous monster. Kortar, upon seeing his love turned into a beast, killed himself with a d'ktagh, prophesying that one day, one would arise who would save his people from the curse he and his mate had created.

But he himself was reincarnated also, but in a form similar to the one he had in life. He and Fek'lhr then departed into the waste-lands of their world, doomed to live out a meaningless existence after death. They found a great cavern deep beneath Qo'noS, which they named Gre'thor, and here they lived in solitude. Eventually, Kortar, yearning for some kind of purpose, built a barge and began searching for those who had died. These he found, and brought back to Gre'thor, where they would spend eternity, with Fek'lhr keeping them from escaping.

Considered both a god and a revolutionary, the "greatest warrior of them all", Kahless the Unforgettable, lived in the 9th century, a time when the Klingon race was divided and warred against each other across their volcanic homeworld of Qo'noS. Under his rule, Kahless united the Klingon race under his standards of honor (which are still held to this day, in some cases) and created the First Klingon Empire.

Like Jesus Christ of the human Christianity religions, Kahless was of humble origins. In addition, it is widely believed by the Klingon race that Kahless awaits all honorable Klingon warriors in Sto-vo-kor, their afterlife.

Contact with humans began in 2151, when a Klingon warrior was pursuing members of the Suliban Cabal to Earth, where he was later wounded by a human. He was later sent back to Qo'noS on the Enterprise (NX-01), despite the admonitions of the Vulcan High Council that it would be dishonor to return an imprisoned Klingon.

Over the years, interactions between the two races became increasingly hostile, with the Klingons viewing the humans as a threat to their way of life and invaders (the latter being that, according to their warrior society, they view all foreigners as possible enemies). This led to the Klingons attempting to use augmented human DNA to create their own super-soldiers. The results were catastrophic, which ended in the infamous Augment virus.

A major result of the Augment virus was the emergence of the Second Klingon Empire. This one, ruled by Augmented Klingons, discarded the teachings of honor and loyalty in favor of a pseudo-fascist state. This new empire lasted for a little over one hundred years, until a cure for the Augment virus was given to the Klingons by the Federation in 2270. Shortly thereafter, the second empire fell and reforms were made back to the old traditions.

After the Khitomer Accord of 2290 and the later Narendra Treaty of 2354, the Klingons entered into a shaky alliance with the Federation, which ended in the 2370s and was reformed shortly thereafter.

By 2409, the Klingons had once again gained independence from the Federation and were on their way to reestablishing the old empire. This period was marked by open conflict with the Federation.

Within a alternate quantum reality created by the Romulan Nero apparently due to a attempt by Nero and his crew to exterminate as many Klingons as possible by unknown means, by doing so this had created a genetic mutation within many Augment effected Klingons giving them a ridged nose bridge similar to Bajorans of an alternate reality (as seen in Image in upper right).

Also due to this accidental mutation many of these Klingons began to behave and return to their earlier ideals of honor and sacrifice that were seemingly lost because of the Human based virus. Also because of this many began to feel the shame and dishonor that many Klingons had first felt when they had 1st contracted the Virus many decades previous. Centrally because of this shame many mutated virus effected Klingons began to wear specially constructed war helmets which bore the appearance of forehead and brow ridges thus disguising their true features.

Within another alternate reality there exists a variation of Klingon that while appears to look similar to Augmented Klingons are in reality a product of an natural evolutionary process. And while they still call themselves Klingon in actuality this name is only a term for the species warrior caste. And unlike the Klingons within our own reality, the Ultarons Allie themselves with the Federation in the mid 2370s, several decades earlier then the signing of the Khitomer Accords.

Their strained relations with the Human species eventually exploded into war. However, when the Andorians and Tellarites entered the war, the Klingons suddenly found themselves beaten back. Many Klingon colonies became Andorian or Tellarite after the war, as a result, millions of Klingons left their home system.

By the 24th century, most Klingons have lived as mercenaries, refugees and pirates.

Just like Humans, Klingons have many different "races" among their culture. The Federation encountered many of these races throughout the centuries.

A Klingon affected by the Augment Virus

The most common Klingon "race"

A Klingon patrol leader in 2259

The Klingon Chancellor in 2257 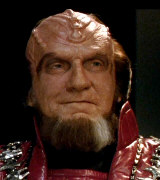 The Klingon Chancellor in 2293
Add a photo to this gallery

Retrieved from "https://memory-gamma.fandom.com/wiki/Klingon?oldid=101105"
Community content is available under CC-BY-SA unless otherwise noted.