Military Assault Command Operations (abbreviated MACO) was a United Earth military organization in service on Earth during the 2150s, prior to the founding of the Federation. The MACOs (pronounced "MAY-ko") were not originally associated with Starfleet.

The military official who oversaw the MACOs was General George Casey. MACO posts included Atlanta, Georgia and the Janus loop. Training posts included West Point in New York. MACOs had similar weapons, training, and tactics to the special forces of a number of member nations of United Earth.

There have been no references to any separate Earth military after the final MACO appearance in 2161. There has only been one explicit mention of a Human holding an army rank after this point in history, and the officer in question – Colonel Patrick West – was shown to be a member of Starfleet in 2293 wearing a vice admiral's rank (which would make him a lieutenant general in the army).

It seems possible that Earth's entire military structure was absorbed into the UFP Starfleet. However, it is equally as possible that MACOs continued as a separate organization from the Starfleet navy, and that Col. West held a dual commission in both organizations. The process of dissolving, absorbing, or continuing separate service organizations as a sovereign world joins the Federation is unclear; however it is known that at least one other Earth organization, UESPA, had continued as a separate agency, albeit one that was seemingly part of, or at least working closely with, Starfleet. The last known UESPA reference, on the USS Enterprise-B dedication plaque (also in 2293), means it is at least possible a pre-Federation agency could survive well over a century later.

It is also possible that West had the rank of vice admiral and the "billet" (military job) of colonel. (In the British army, a general in charge of a regiment can be called the Colonel of the Regiment.) As for the continued existence of the MACOs as part of the UFP Starfleet, the British Cavalry is part of the British Army, but it still uses its older traditional names for the ranks.

24th century and beyond

In year 2301 the EMACOs a new MACO unit need a new ship for there troops to go in, and out really fast. So States Class Long-Range Assault Cruisers was design and tested by Starfleet and EMACOs Engieneers on Terra and Mars. In March of 2306 the first States frame work what down.

Post-Dominion War analyses described Starfleet Security's performance as front-line ground troops during the war as abysmal. They took roughly twice the casualties per capita of any other branch or even the Klingon Defense Force's ground troops. In 2379, Fleet Admiral William Ross, Commander-in-Chief of Starfleet, ordered the reorganization of MACO as a sub-department of Starfleet Security. The intention was to have an elite naval infantry, along the lines of the SEALs of the ancient United States Navy. The enlisted rating of Special Warfare Operator was created solely for their use, and Klingon Defense Force and Bajoran Militia instructors were recruited to help develop the program. The first MACO units entered service in 2380, attached to broadly dispersed commands.

Though focused on Security enlisted personnel, MACO training was open to all individuals who met scoring requirements, and by the late 2390s possessing MACO qualification and training had a degree of prestige among Starfleet's officer corps.

In 2385, MACO Unit 104 was involved in the USS Susquehanna's successful boarding and capture of the ISS Decisive, taking only one lightly wounded casualty. This action cemented the new organization's reputation, as previous similar actions by Starfleet Security had not been as successful.

By 2409, many MACO units were assigned to Battle Group Omega on the Borg front in the Gamma Oirionis sector.

Standard weaponry for MACO personnel in the 22nd century was a stun baton, stun grenades, phase pistol, and a phase rifle. The stun grenades worked similarly to "flashbang" grenades. The rifle, in sniper mode, bore a strong resemblance to the Federation sniper rifle of the time. MACO mission patches were a shark, a reference to the mako species.

Memories of the Dominion War and renewed conflicts with the Klingons, caused MACO commanding officers to realize that specialized combat equipment was needed to supplement the elite training of their soldiers. As such, polyalloy weave combat armor was developed to protect the troops while the Type 3 compression phaser rifle provided the firepower needed in combat.

With revision 120.2C to the Starfleet Uniform Code, a new uniform (commonly referred to as the "Odyssey") was adopted by Starfleet. MACO personnel wore the standard uniforms, but with a department color of deep blue. 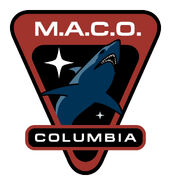 Service patch for MACO personnel assigned to the Columbia in the mid-22nd century. 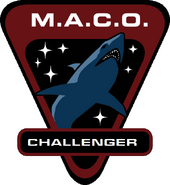 Service patch for MACO personnel assigned to the Challenger in the mid-22nd century.

MACO combat armor variants, circa 2409.
Add a photo to this gallery

Retrieved from "https://memory-gamma.fandom.com/wiki/Military_Assault_Command_Operations?oldid=92183"
Community content is available under CC-BY-SA unless otherwise noted.