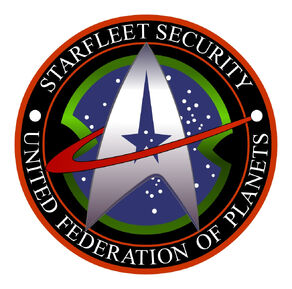 A special division of Starfleet Security provides constant security for the Federation President. Members of the presidential protection division are present with the President at all times, and constantly guard the Château Thelian and the Presidential Office. Typically, Security officers are garbed in a standard Starfleet duty uniform; on special occasions, officers may wear formal wear from their home planets or a Starfleet dress uniform.

Security personnel served functions both defensive and offensive, ranging from security patrols on board a starship, to guarding prisoners, to firing the ship's weapons, to providing protection during landing party/away team missions, and more. In the 24th century the officer in charge of security on a starship was given the title of Security Chief.

Retrieved from "https://memory-gamma.fandom.com/wiki/Starfleet_Security?oldid=80591"
Community content is available under CC-BY-SA unless otherwise noted.